A Day in the life of…Sean Sutton 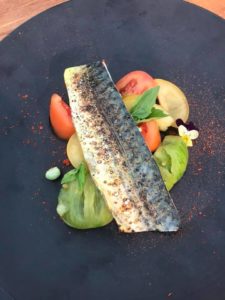 As Head Chef at Alderley Edge Hotel, a day in the life of Sean Sutton is understandably a busy one!

Just 32 years old, the jump to Head Chef has been a long road for Sean. After training at Macclesfield College, Sean started in kitchens at a young age. He has been at Alderley Edge Hotel for an impressive 11 years now and trained under the previous Head Chef Chris Holland.

When Chris left in 2014, despite his young age, Sean was the perfect person to take the reigns. His creative flair and eye for detail is exquisite and his menus reflect that.

A kitchen in a hotel has an early start. With 50 bedrooms in the hotel we can sometimes have 100 hungry people ready for a delicious breakfast at 7am. Preparations for breakfast start at 5am to ensure everything is ready for a busy service. We have dedicated breakfast Chefs here at the hotel and they do a great job under extreme time pressure!

Sean typically starts his day at around 9am on a normal day when we have no events on. This is to prep for his lunch and dinner service and start baking for any Afternoon Teas we have in that day.

If we have a wedding or an event on his start time can be a lot earlier! Imagine having a full breakfast, lunch and dinner service and a wedding for 120 people – that’s a LOT of food to prepare!

But prep and cooking is actually only a small part of Sean’s role as Head Chef. His responsibilities are far greater, such as rotas for the staff, the costing up of menus and new dishes and creating specialist menus for any events we have on.

The development of our new menu has been a huge priority for Sean. With JW Lees spending so much on the refurbishment and the standards and service being so high, the food has to match.

As part of the menu development, Sean has worked in other kitchens with other Chefs around the country whilst researching the best in British cuisine. After spending some time at The Gamebird at The Stafford Hotel in London Sean was more enthused than ever to create a new masterpiece!

Sean’s 70 hour weeks and sheer determination have resulted in an incredible new menu (even if we do say so ourselves!) and the variety to leave you pondering what to choose.

Why not book a table and come and try for yourself. We don’t think you’ll be disappointed.

Back to Blog Posts